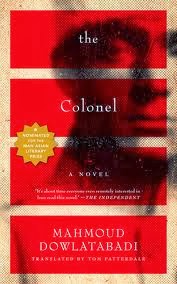 According to the official website of the Jan Michalki Prize, the 2013 prize is awarded to Mahmoud Dowlatabadi for his novel “The Colonel”.

The Jan Michalski Prize for Literature is attributed each year by the Foundation to crown a work of world literature. An original feature of the Prize is its multicultural nature. It is open to authors from the world over and is intended to contribute to their international recognition. The Prize will be awarded for works of fiction or non fiction, irrespective of the language in which it is written. The winner will receive an amount of CHF 50,000, offering the possibility of greater dedication to her or his art. The authors of short-listed works will be invited for a three-month period of residence in the Maison de l’Ecriture.

The publisher’s reaction to the prize is also interesting, as it says:

Some prizes are important, and some prizes are just not to be trusted. For instance, a prize where when you win it you, you have to go to Stockholm and see a princess? That can’t be real. Which is why we were very happy to hear that The Colonel by Melville House author Mahmoud Dowlatabadi (and superior scarf-wearer) has been chosen as this year’s winner of the Jan Michalski Prize.

2. Forough Travels to Kuwait with Bidaj

The collection of poems of Forough Farokhzad has been translated into Arabic and published in Kuwait. Translated by Iranian Mousa Bidaj and Samir Arshasdi, professor of Persian literature in Kuwait University, the book is released in many countries in the Arab world.

The translators also trace details of Forough’s biography and her literary career in their introduction. The poetry collection is published by Dr. Suad al-Sabah publications.
(Dr. Suad al-Sabah is one of the most famous poets in the
The publisher has stated in the foreword:

While we were introducing innovative works of international literature to Arab readers, we decided to publish contemporary Persian poetry in Arabic. In spite of her short life, Forough made an improvement in contemporary poetry that can be a role model for the younger generation in Arab countries.

What is art in your opinion? Are your tastes still dominated by the long-held western aesthetics that privileges the ‘fine art’ over other forms of arts and craft? Then you will miss the greatest part of creativity and artistic innovation that have been preserved generation after generation through the domestic arts of cooking, sewing, and beautiful handmade gems that make a significant part of Persian life.

Here is an article by Azita Houshiar (published by BROWNBOOK), an Iranian living in New York on the art of making homemade ‘Sekanjabin Sarbat’ for guests, a kitchen art that is still practiced by the majority of Iranians. Sharbat ‘e sekanjabin is a sweet and sour mint cooler that is synonymous with the Persian summertime, wherever you are.

This is not his only achievement though. Fish and Cat was also an Asia Pacific Film Festival nominee and a winner in the 70th Venice Film Festival.

5. The Spell Chanted by Lambs Now Audible in English

The British-Iranian publisher Candle&Fog has recently released Reza Ghassemi’s breakthrough novel, The Spell Chanted by Lambs. Initially published in installments under the title of Madman and the Moonpars Tower on the writer’s blog (the original Persian version still available on the writer’s page), the novel is rated as the first thoroughly online novel in Persian. It was later published by Khavaran Publicatinos in Paris, yet is still widely read in free ebook formats and has attracted the critics’ and readers’ attentions since its publication in 2004.

Deeply rooted in the author’s musical background as a professional Setar player, and also in Iranian cultural traditions such as the sacred function of the number 40 for the mystics and common believers, The Spell Chanted by Lambs is an account of the narrator’s forty accounts (contemplations) of the forty steps he has to undergo to build the ideal Setar and achieve perfection… It is written in disjointed pieces of thought with many flashbacks and flash-forwards and opens up a panorama of the obsessions and peculiarities of modern Iranian intellectuals who flounder in an amalgamation of history, tradition, and modernism.

The novel is translated by a young promising translator Erfan Mojib to make his debut work in English. You can get the book from Amazon here.

According to IBNA, the rights of a book by late Iranian writer Nader Ebrahimi has been granted to a Danish publisher by Ghazaal Literary Agency. The book is already translated to Dutch and is under publication.  Once Again the City I Loved is translated to Danish by Shokufeh Tadayoni and is now in the hands of Danish publisher Korridor Small Press.

The acclaimed online journal of world literature Words Without Borders (2003-2013) is celebrating their first ten years of activity with a special issue for November 2013. Among many interesting materials to read, there is a Goli Taraghi piece interviewed by Nahid Mozaffari in which she accounts her own dual existence Between Two Worlds. In a part of the conversation on changes in the cultural arena of Iran, Taraghi says:

I take the work of women writers seriously. There is a humble sincerity in their writings that you don’t find in the writing of a male writer.  Iranian literature before the Revolution was dominated by communist ideology, and one can define it as a sociopolitical literature.  Iranian writers mostly came from lower-middle-class families and wrote about the misery of the poor peasants or the oppressed laborers. Even if there were two or three well-to-do writers among them, they too, being Marxists, chose their characters from among the deprived classes of the society.  Women writers have created a new genre of literature: an intimate and personal one. They remain true to themselves and speak openly of their personal problems, their loneliness in their unhappy married life. Due to official censorship, family censorship, or their own shame of revealing all, they cannot speak out frankly, but they say what they want to say with a delicate feminine cleverness, by hints and symbolism. They speak about love.  And they dream of love, but in a very quiet shadowy way: As if nothing has been said.  For example, one of them writes, “If my husband knew what thoughts pass my mind, he would kill me.”  It is obvious that she is referring to erotic fantasies. Men cannot write like this. Or even take this type of literature seriously.

Ali-Ashraf Darvishian, Iranian writer born in 1941 in Kermanshah is apparently more valued in Iraq than Iran, as he was lauded by the 17th Gelavizh Cultural Festival and dedicated the Annual Award yesterday (Wed. 27 Nov. 2013) in Sulaymaniyah’s Hotel Balas, Kurd zone of Iraq.

During the festival, ISNA reports, that was held in commemoration of late Sherku Bikes, with the participation of a large number of writers  from Iran, Kuwait, Turkey, Syria, Tunisia, Egypt, etc. Darvishian was awarded as the veteran Iranian writer of Kurdish origin. Darvishian is also known for his political activism before and after the Revolution. Among his best works are story collection Abshooran, novel Cloudy Years, and research work Iranian Legends and Fairy Tales Encyclopedia.

Hamed Esmaeilion Recommends
Let Us Steal a Lease of Life
May 2016
How to Survive in Tehran, Bamdad Will Teach You!
Friendly with Editors of Tremors
Take a Pictorial Tour to Modern Iranian Diorama
30 Jan 2015
Four Spring Songs by Hafiz Shirazi