“Bombay Rain” is from a collection of interrelated short stories whose protagonist and/or narrator is an Iranian living in India, bringing together elements of both cultures, places, languages, etc. The story is about the narrator and his friend wanting to make a film about the late Iranian author Sadegh Hedayat. Hedayat (1903-1951) is known by many, friend and foe, as one of the pillars of the contemporary Persian literature. His most famous work is a novella entitled بوف کور , The Blind Owl, which was written in Iran but primarily published in India in fifty copies (as mentioned in “Bombay Rain”). The Blind Owl was first translated into French in 1953 and then into English in 1957 (by D. P. Costello. Another translation in English is by Iraj Bashiri, 1984).
The Blind Owl is about a man’s obsession with a mysterious woman and her eyes but this is an awful way to introduce the work. It cannot really be summarized and any attempt to do so fails the narration, the style, the several layers at work, the complex spiritual and philosophical context, the madness, the mysteriousness, and the haunting aura. And that is not what this note aims at. It rather wants to look at how Hedayat and The Blind Owl have informed Yazdanjoo’s “Bombay Rain” and been in turn in a way translated/resurrected by it.
Hedayat and The Blind Owl are resurrected in two ways in “Bombay Rain”:
1) The first is the more direct one, through the explicit references to Hedayat and his masterpiece in the story. The story begins and forms around Hedayat, whom the narrator and his friend aim to bring back to life in a film about The Blind Owl: forming “an Iranian/Indian/French triangle” to make “a feature film, including recreations of parts of The Blind Owl, with the supposed author as a ‘shadow’ and Marcel and I as interpreters.” The film never materializes in the story world (neither the talks about making another film about the failure of the project get anywhere in the story), but the characters’ obsession with Hedayat is the driving force of the story and thus Hedayat actually does get brought back to life in world of the story.
2) The second and to my belief more interesting way is the more complicated subtle translation/resurrection, which happens in the deeper layers of the story, through the translation/transformation of Hedayat, his character and his life details, into Yazdanjoo’s story. For example, the fact that Hedayat committed suicides translates into one of the story’s characters Krishna’s father’s committing suicide. Moreover, many of the threading elements of Hedayat’s novella are transferred to modern times and places, finding their way, in new, but still visibly recognizable, context and form into “Bombay Rain.” The shadow; the weird laughter; death and the decapitated head; the mysterious appearance, reappearance, and disappearance of some of the characters; their merging vague identities; the division of the landscape into the interior of the house and the strange outside, with a strong presence of threshold spaces; and the constant translation of dreams, illusions, and realities into one another and then into art forms in “Bombay Rain” all come from The Blind Owl. For example, the narrator of The Blind Owl translates the gaze of the mysterious woman into an image he draws on a pencil case and later on finds on an antique jar discovered while digging a grave for the woman. In “Bombay Rain” the characters wish to transform Hedayat’s gaze into moving images/film and fail, a gaze that has already overshadowed Persian literature and arts for many decades. The artist of the old story is a painter of pencil cases. The artists of the new story are filmmakers. The old story is local and involves mainly family members. The new story goes beyond borders and brings together friends from different countries.
Yazdanjoo’s work relies heavily on intertextual games, of which Hedayat himself was a master, games whose decoding have been an important key for scholars into the world of The Blind Owl. There is no way that “Bombay Rain” could have come into existence without it being preceded by The Blind Owl. But it would not have been the engaging story it is now if Yazdanjoo had simply used Hedayat for name-dropping, without weaving Hedayat’s concerns with narrative into the present story. The fact that the movie production fails in “Bombay Rain” could be read as Yazdanjoo’s commentary on how any art form that wants to keep alive an author’s heritage by lazily using his/her figure, or his/her shadow, is doomed to failure. The continuance of life can only happen in the author and his work becoming the soul of new works, translated for the time and place the new works are set in. 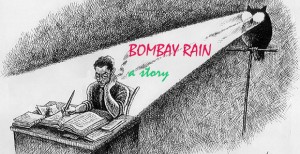 The translation project at hand moreover brings forth the significance of living and breathing as translator writers / writer translators, in various cultures and languages, with a lineage of translators and translations to learn from and be inspired by.
Hedayat was born on 14 Farvardin 1330 in Tehran. He was born in the motherland, into an Iranian calendar, into the mother language. He grew to become one of the most important modern Persian writers and a translator. Hedayat committed suicide on 04 Avril 1951 in Paris. His tomb is in Père Lachaise Cemetery. He died in a foreign land, into a Gregorian calendar, into a second language.
Yazdanjoo and I were both born and grew up and become who we are in Iran, but now live in two different corners of the world: he in India, I in the US, and we work together on the translation project of the book through emails and Skype.
Hedayat read extensively in French (French and non-French translated authors), books that were sent to him by friends through the postal mail and/or brought back by travelers. Authors such as: Celine, Camus, Sartre, Cezanne, Joyce, Miller, Joseph Breitbach, Julien Green, Jean Schlumberger, Maurice Wargnier, El Hakim, Robert Rochefort, Stuart Engstrand, Ann Vickers, M. A. Charignon, Stanislaviski, A. Adamov, H. Calet, and the list goes on and on. And Hedayat was not the only one interested in and involved with foreign books and literary magazines. This was the prevalent atmosphere among Iranian intellectuals of the day.
Today foreign books and authors still play an important role in forming the literary tastes and careers of Iranian authors. Many Iranian authors constantly read foreign works either in their Persian translations or in English (sometimes it is the original language of the work and sometimes the translation language). Translated books constitute a large percentage of the published works in Iran, despite the complex labyrinth of permissions and censorship issues one has to constantly navigate. Access to original foreign works can be a challenge, for many reasons (from government restrictions to sanctions), but today because of the internet it is much easier to keep in touch with what is going on outside the borders, compared to the time of Hedayat, and avid readers always find ways to go around limitations. Many readers in Iran who don’t have easy access to foreign books have their friends traveling from abroad to Tehran buy and carry books in their suitcases or have them buy their e-books for them. Hedayat was a translator himself. He translated from French works by Sartre, Kafka, Chekhov, Kielland, Schnitzler, and works from Persian Pahlavi language into modern Persian. Payam Yazdanjoo too is a translator and writer. His published works (which amount to some thirty titles) include translations of books (from English) by Roland Barthes, Richard Brautigan, Christopher Norris, Graham Allen, Richard Rorty, and many others. I read in, translate to/from, and write in English. And we are not the exceptions. Many other Iranian authors translate (or aspire to) alongside writing.
Hedayat has moreover woven translation, in the broader sense of the word, into the writing of The Blind Owl. On one of his last meetings with M. Farzaneh, who later wrote an important book on Hedayat, Hedayat gave Farzaneh examples of real events in his life that he had translated or “transposed” into events in the story world of the book and named foreign books/movies that to understand his story one needed to check: to read Le Double et le Don Juan by Otto Rank and Lady Macbeth au village by Nicolas Leskov, and to watch The Student of Prague. But these were not the only influences on his work. Perhaps if he were talking to a French reader of his, he would then point out to elements of his Iranianness and examples of Persian literature (both classical and more contemporary of his time) that had informed the work.
The same holds true for Yazdanjoo’s current collection from which the story “Bombay Rain” has been translated here. One can of course read Yazdanjoo’s work (as well as Hedayat’s) and get much out of them without the knowledge of or research into the larger literary context around them (Persian or other), but much is also lost if one does merely that. These works challenge their readers to further engage with the text and to reach out to other literary and cultural sensitivities that have shaped them, thus pushing them to broaden their literariness beyond the experience of the present text.
On the second day that Hedayat met with Farzaneh, then a young inexperienced translator and writer, Hedayat told Farazaneh, “To write, one should read, translate, and write” (58). For Hedayat, translating was as important as the other two activities. So it is for Yazdanjoo, me, and many other Iranian authors. Our writers’ writer beings are inseparable from our translator beings. And so are our stories from those of a lineage of Iranian and Other writers and translators.