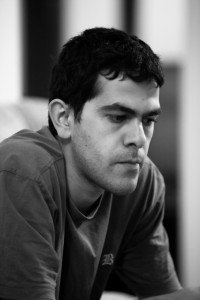 Born in 1981 in Tehran, Payman Fiuzat started his studies as an electronics student at Azad University but then changed his major to English translation a while later, from which he graduated in 2006. An avid musician and pianist, Payman is currently a private music teacher in Tehran. Nonetheless, he is also a short story writer.

By far Payman has published three collections of short stories: Gridlock (Agah pub. 2010); The Negative Exhibition (Ameh pub. 2011); and The Empty Wards (Agah pub. 2014). In 2007, “The Palm” was nominated for the Sadeq Hedayat Award. Payman’s short stories revolve around the life of urban youth and marginalized communities in Iran. In his latest collection of short stories, he has ironically depicted the social and economic corruption of Tehran; Gridlock is set in a car graveyard in Tehran suburbs, but told from the prospective of an outsider. Another story from this set, “Scorpion in a Boot” is an account of ongoing violence in the background of ordinary neighborhoods. Negative Exhibition explores the experiences of youth in Tehran that are most often disaccordant with one’s expectations. “The Hell Should Be a Place in Black and White” and “Out of Breath” are about artists who are marginalized by their own art form.

Asked about his top seven literary inspirations, he mentioned the following works as his favorite:

He also finds the following Persian pieces suitable for translation:

And, of course, he finds his own works translateable!

Laughter in the House of Loneliness (2002)

Winner of the 2003 Houshang Golshiri Award, the Berlin-Based Bahram Moradi’s short story collection attempts to portray migratory spaces with a keen sense of form and irony as a dominant and autonomous element of fiction. In this respect, Moradi could be named a true disciple of Bahram Sadeqi and Sadeq Choubak.

Born in 1914, Jafar Shari is an eminent historiographer of Tehran. Bitter Sugar, the first volume of his Tehran trilogy, is an account of his childhood life.

Azadeh Ghahvie
About Azadeh Ghahvie 6 Articles
holds a BA in English Literature and an MA in Indian Studies from the University of Tehran. Since her graduation, she has been working as a researcher and translator in wide-ranging fields of studies from peace and regional studies to literary and art criticism.