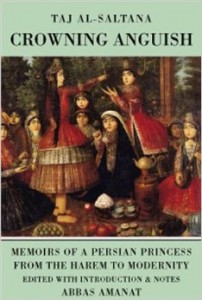 Title: Crowning Anguish: Memoirs of a Persian Princess from the Harem to Modernity 1884-1914

Long before Iranian diaspora women’s memoirs became popular in the West, an Iranian princess of the Qajar dynasty, Taj-al-Saltaneh, ventured into this genre. Despite being raised in Naser-al-Din Shah’s harem, where the Shah’s ardor and egotism had gathered hundreds of women constantly competing with each other for his attention, Taj-al-Saltaneh managed to grow beyond the shallowness and materialism of her surroundings, and became one of the first enlightened and progressive Iranian women of her time. She has been called a feminist and a socialist. In her memoir, Taj-al-Saltaneh is very outspoken in criticizing patriarchy and the backwardness of her father, and her brother, Mozaffar-al-Din Shah. When she talks about her pain after her father’s assassination, she reminds the reader of her greater suffering about Iran’s present and future:

Every daughter is entitled to her pain and suffering after her father’s death. But I am sorry for my father’s assassination, just as much as any daughter would be after her father’s passing. But, I suffer more and my heart bleeds at the thought of this water, this soil, this land which is my home, and in which I was raised. At this moment that I am writing these words it feels like a curtain of ignorance has been shifted from in front of my eyes; the events of the past are fast-forwarding in my mind.

Alas! A country and a nation have been the victim’s of one person’s greed! (79)

The Memories of Taj-al-Saltaneh shows how, from the very beginning, Iranian women’s life writing was socially and politically charged.

Although a manuscript of the Memories of Taj-al-Saltaneh was written in 1924, it did not appear in print until 1983, as part of the “Publication of Iran’s History” project. This first version, which included a foreword by prominent scholar Mansoureh Ettehadieh and Sirous Sa’advandian, was based on a manuscript by Rahmat-ollah Da’ee Taleqani—attendant to the Embassy of Afghanistan in Iran—who apparently had Taj-al-Saltaneh’s original manuscript. However, the original manuscript was never found.

Taj-al-Saltaneh’s memories show that she was familiar with the arts of music and painting, and with French history and literature. With detailed descriptions of events, places and people’s physical and behavioral traits, Taj-al-Saltaneh’s writing style is reminiscent of 19th century French writers. Stylistically, The Memories of Taj-al Saltaneh is a good example of the Persian life writing subgenre of “khaterat,” where there is a mixture of the personal and the public world, and a mixture of individual and collective memory. Taj-al-Saltaneh revisits her memories from her childhood in the harem, to the assasination of her father, to her marriage, and her subsequent divorce from her husband. She investigates and reviews her life on the backdrop of historical events. The thirty-year period in her life, which she has covered in The Memories, also happen to be the period in Iran’s history where the society is moving from the old and traditional order of things to the new and modern order. It is a time of rapid change and confusion. Women in the U.S., France and Britain had gained the right to vote, but despite their involvement in the Constitutional Revolution (1905-1907), Iranian women were still deprived of basic citizenship rights. Regardless of her royal lineage, Princess Taj-al-Saltaneh, avidly defends the Constitutional revolution:

Constitutional monarchy means that a nation gains the right to freedom and advancement; there is no prejudice and treason. It is every nation’s duty to look for advancement and justice. But when do people gain their rights and see justice in place? When monarchy is constitutional, and the country is run under a regulated and righteous system. How does a country advance? Through law. When is law enforced? When this despotic system is removed. Then of course, constitutional monarchy is better than autocracy. (161-162)

The Memories of Taj-al-Saltaneh is translated to English by Anna Vanzan, and published by Mage Publishers, under the title Crowning Anguish.

The Baron's Melancholy Blues
The Sama: Hearing with the Heart
All Faces of Forough: an Iconographic Report
Homage to Modern Scheherazade of Iran
Afra or the Day Passes: A Structuralist Reading (I)
Shazdeh Ehtejab
Karnameh Exhibition: A Diorama of Arts for Iranian Children
That Cozy Corner on the Left