Goli Taraghi (b. 1939 in Tehran) is an exilic Iranian writer living and working in France. Although her writings are frequently censored in her home country, they are widely circulated there and receive much attention from the public. The stories of this collection, The Pomegranate Lady and Her Sons translated from Persian to English by Sara Khalili, are chosen from a number of short story collections originally published in Persian. 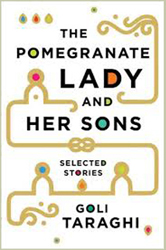 In the ten short stories of this collection, Taraghi writes about the absurdities of life; she writes of love and loss, and about feelings of alienation and belonging. Her stories depict lonely individuals carrying the weight of their hopelessness from one day to another. They also show how Iran’s 1979 Islamic Revolution affected the lives of people from all walks of life: from sophisticated aristocrats (“Gentleman Thief”) to an old woman from a remote rural area in the deserts of Iran (“The Pomegranate Lady and Her Sons”). This review looks briefly at four of these short stories.

The first story, “Gentleman Thief,” is narrated by a young woman of privileged social background. She is witnessing the emotional and physical demise of her mother and grandmother in the aftermath of the 1979 Islamic Revolution. The Revolution makes her family’s property public domain; just in the same way that it turns their memories of a lavish past into national history. In the narrator’s eyes the Revolution also turns a respectable math teacher into a thief and later, ironically, to the guardian of the objects he wanted to steal and the man from whom he wanted to steal them.

Despite Iran being the setting of another significant short story, “In Another Place,” this story presents an exilic mood. It mixes two geographical and emotional/mental loci. Amir-Ali, the protagonist, has long suffered from chaining his true self both at home and outside. At home, he wears the mask of a proper gentleman to meet the standards of his aristocratic wife; outside, he is forced to put on a different mask and pretend he is religious to maintain his lucrative business in a post-revolutionary Iran. His physical and emotional freedom comes in a place outside of the city where the political ideology has hardly had a chance to touch.

Many, including Taraghi herself, consider another story, “The Great Lady of my Soul,” to be her best short story. The story, written in the peak of the revolution, is about a protagonist distancing herself from the loud cries of the city and reaching inner peace through taking a mystical mental journey. The setting of the story and its mood is reminiscent of the poetry of Sohrab Sepehri, the notable modernist Iranian poet and painter, in its depiction of nature’s tranquility and healing quality.

The final story, which also lends its name to this collection, is “The Pomegranate Lady and Her Sons.” This story is the epitome of Taraghi’s style and subject matter. “The Pomegranate Lady” is realistically magical, and incredibly de-familiarizing. In this story an old woman from a remote village in Iran is travelling to Europe. In the plane, she is seated next to a sophisticated expatriate who is sick of everything in post-revolutionary Iran. The expatriate, also the narrator of the story, acts aloof and uninterested in whatever Pomegranate Lady has to offer: her life-story, her children’s stories, the reason she is taking on this journey so far away from her home, and even the squeezed juicy pomegranates she has to offer her. To the narrator, her own reasons for expatriation are valid, important justifiable, but the reasons of an old, simple, illiterate, rural woman’s journey to the free world, is insignificant. The Pomegranate Lady asks the expatriate lady for help in order to get to Sweden where her sons are, but the narrator’s carelessness misleads the old woman even more.

I find Goli Taraghi’s short stories in this collection to be representative, and critical of the relationship between the Iranian upper class elite, and regular middle to lower class Iranians. Although everybody’s life is drastically changed and influenced by the 1979 Islamic Revolution, the upper class are out of touch with the reality of post revolutionary Iran. In the stories they are shown as having little interest in connecting with people outside their social class, and in understanding how this major life changing revolution came about.

As Though Someone Is Laughing at Little Girls!
Savushun
Scorpion on Andimeshk Railway Stairs
Postscript to Silence
Nocturnal Harmony of Lumbers’ Orchestra
A Translator’s Note: Hedayat, Translated / Hedayat, the Translator
Karnameh Exhibition: A Diorama of Arts for Iranian Children
Memorial Day