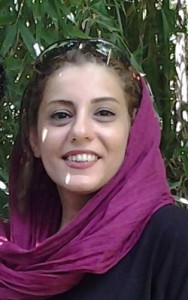 Natasha Moharramzadeh was born in 1979 in the northern city of Lahijan. She holds an MA degree in Art Research from the Art University of Tehran, but is mostly known as an aspiring writer and dramatist. Natasha started her literary career in 2000 by writing plays and stories which soon brought her fame as well as a number of awards and positions such as:

Winner of the 6th Youth Poetry & Fiction Congress in Bandar Abbas (2004), nominee of Golshiri and Mehregan Awards for “It’s Past Death Time” (2005), twice winner of nationwide Qesas Festival for “Fancy of the Nile” (2007) and “Sign” (2009), finalist of Alborz Provincial Festival, winner of the 16th Iran International Festival of University Theater for the play “The Wall” (2011) and praiseworthy winner of the first Festival of Iran Foundation of Dramatic Literature (2013). Natasha’s debut short story collection, “They Die for Your Dress” was published by Hila Publications in 2014, while three of her plays collected in a book titled “Venus and the Plastic Pitcher” is awaiting publication by Ilia. Also, she has translated a collection of Sherwood Anderson’s short stories together with Reza Sotoudeh, which has just been released by Negah Publications (2014).

We asked Natasha about her best reads of world literature and her recommendations of the often neglected productions of contemporary Persian drama.

PARSAGON: What are the top seven works of world literature that have influenced your life and literary career?How?

You had asked me to write about my choices. The fact is that if all the books of the world are to burn and I’m allowed to take one book out of all the books, I would definitely pick Caligula – the quintessence of human beings’ perpetual sorrows, rebellions and desiring selves. What can I say about Waiting for Godot proportionate to its grandeur? Almost nothing. Dostoyevsky’s The Gambler was life per se, and just like some moments in real life, it made me lose my breath. Dox Quixote is the greatest and most precious tragic work I have ever seen. Tears I have shed for the cavalier and I have smiled with his loyal Sancho Panza, always wondering why Shakespeare is so definitely taken as the only tragedian who managed to accompany smiles with catastrophe.

I have admired One Thousand and One Nights for the existential anxiety in the spirit of the work. And Herman Hesse’s Knulp keeps me believing in humanity, honor and friendship even in the midst of despair. Therefore, I cannot cross out Herman Hesse from my favorite list in spite of many other desirable choices like Sherwood Anderson, William Faulkner, Salinger, Ernest Hemingway, Virginia Woolf, Simon de Beauvoir, Jean-Paul Sartre, etc.

PARSAGON: Would you introduce seven successful Persian literary works including drama, fiction or poetry that are worth attention or translatino to other languages?

MOHARRAMZADEH: I believe that we have so many young talents in playwriting, yet these plays never get published because of the publishers’’ lack of interest. I often face such works in regional festivals, and sometimes many wonderful texts cannot reach shortlists to Fajr Festival because of poor directing or acting qualities, and so are forgotten soon. It’s painful to see that they don’t even get a chance to get published in their native language. Among contemporary renowned dramatists I only mention Alireza Naderi, Nader Borani-Marand, Mohammad Yaghubi, Jamsid Khanian, Hamidreza Azarang, Hamidreza Naimi and Homayun Ghanizadeh only to give more room to less known young writers like Ali Saghafi and Reza Shahbodaghi from Tehranm Keyvan Khosrow-Moradi, Yousef Fakhrayi, Vahid Darvishi and me from Guilan; Fatemeh Makari from Mazandaran; Sahra Ramezanian from Khorasan; Peyman Daneshmand from Kurdistan; Naser Habibian, Arash Abbasi, Hossein Safi and Sajdad Tahmasebi from Hamadan; Abdolreza Faridzadeh from Lorestan, Arman Tiran from Fars, Mohammadreza Zandi from Kermanshah, Ali Heidari from Khuzestan, Reza Garshasb from Buyerahmad, Milad Akbarnejad from Fars, Mohammadreza Kouhestani from Qom,…

I have no expertise in poetry. As for fiction, the works of my choice might have already been translated. In my choice, besides the strength of the stories, I have also paid attention to the works that are less language-based and hence, are more translatable:

There are definitely many more writers of quality. For instance, Reza Ghassemi is my favorite writer and would be my eighth choice. I admire Bahram Heidari and Hormoz Shahdadi’s Night of Fright or Baraheni’s Mysteries of My Homeland offers valuable historical and fictional information to overseas readers. But we should not take it for granted that translating our fictional literature is a historic service, and we should let the translator give his/her own literary taste a high priority for such a great endeavor. For sure a work of art that is done wholeheartedly would finally attract hearts.