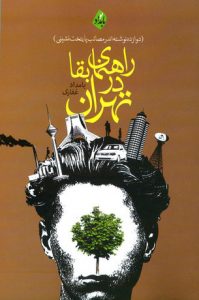 According to Tehran Times, Bamdad Ghaffari, an Iranian man who returned home in 2012 years after living in Canada, has satirized the lifestyle in the capital in his book “A Guide to Survive in Tehran”.

The book, which has recently been published by the Bamdad-e No Company, contains twelve articles about the problems of living in the capital, the Persian service of MNA reported on Saturday.

Driving, housing, shopping, marriage and divorce, guests, job, football, and happiness are among the articles in the book.

“Tehran creates love and hatred within you simultaneously. I am sure I am not alone in this feeling and many immigrants and residents of Tehran have the same feelings toward this big city. Tehran fascinates everybody with its magic,” writes the author in the introduction of the book.

“It took eight years after the magic of Tehran had its effect on me. I, who had an ideal life in Canada, left everything and returned to Tehran, despite disagreement by all family members and friends,” the introduction continues.

“However, as I said, I returned to Tehran, but less than a month, the magic of Tehran faded away and I found out that Tehran apparently has not changed much, to be honest, it had become even worse,” the writer continues in the introduction.

“Thanks God, Tehran has outpaced other cities. That is, it has the highest number of divorces and the lowest number of marriages. As a Tehrani, you will get involved in this issue whether you like it or not,” reads part of the book.

“In Tehran, marriage and divorce has its own special customs. The main characteristic of youth in choosing their spouses is that they are not seeking love. To love and to be loved is a childish habit, which has disappeared from Tehran years ago. Instead, logical and measurable standards have replaced this,” the book continues.