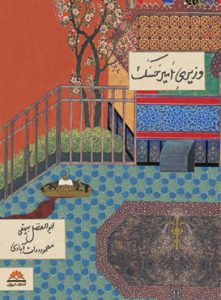 The renowned Iranian author Mahmud Dowlatabadi’s latest book on the story of the chancellorship of Hasanak the Vizier (based on Persian historian Abul-Fazl Bayhaqi’s “Masudian History”) is published, reports Tehran Times.

The book entitled “The Chancellorship of Emir Hasanak” and an audio CD, which contains Dowlatabadi’s narration of the story, were published in Sabzevar, the northeastern Iranian town that is the birthplace of Bayhaqi and Dowlatabadi.

Firuzi Publications planned to finance making a sculpture of Dowlatabadi, which was to be set up in Sabzevar. However, the plan was cancelled due to Dowlatabadi’s objection. He proposed instead that the publisher work on “Masudian History”, which is also known as “The History of Bayhaqi”.

“I told them ‘Why don’t you work on the ‘History of Bayhaqi’,” Dowlatabadi says, “He is a master of Persian prose… I chose this story since Hasanak has been introduced in universities and people know Bayhaqi through him.”

Bayhaqi (995–1077) worked as secretary at the Ghaznavid court and wrote a remarkable history of the Ghaznavids in “Masoudian History”, which is the first major prose work in New Persian.

“His attention to detail led him to provide a number of intimate glimpses into the private lives and behavior of his contemporaries, as well as accounts of customs, ceremonies, and rites. He describes, for example, how Hasanak presented himself before the tribunal,” Encyclopaedia Iranica wrote.

Abu Ali Hasan bin Mohammad (called Hasanak) was a strong supporter of the succession claims of Sultan Mahmud’s younger son Mohammad. Hasanak and Ali bin Il-Arslan Qarib, Turkish military commander of the early Ghaznavids, Mahmud, Mohammad, and Masud I, no doubt hoped that they would be the real power behind the throne.

He was executed by hanging during the reign of Masud I. His official charge was disloyalty, which was a politically motivated charge.

“The History of Bayhaqi” has been translated into other languages. An Arabic version entitled “Tarik al-Bayhaqi” was prepared by Yahya al-Kassab and Sadeq Nas’at and published in Cairo in 1956.