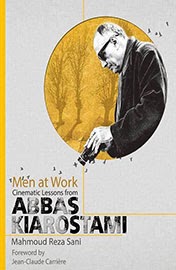 Mahmoud-Reza Sani, a name that we will be hearing more in the future, has been a student of Kiarostami during a European workshop. Now comes his debut book on Kiarostami and his Cinematic Lessons:In February 2012, Abbas Kiarostami traveled to Spain to receive the Ibn-Arabi trophy for a life­time of artistic achievements. It was decided at that time that he would hold a 10 day film maker work­shop for 35 students who had traveled from all over the world in eager anticipation to attend this once in a life­time event.In a conversation with the students and author, Kiarostami reminisces about his past experiences making movies, offers insight into his cinematic style, and advises the students on how to shape their stories and find their voice, not only in the world of film but also in their lives, which create the book’s context.Mahmoud Reza Sani is an award winning filmmaker and the president of the Ibn Arabi Film Festival (IBAFF) located in Murcia, Spain. He has written, directed and produced several short and feature films, documentaries and television serials.

In 2000 he founded Arvandan Film Production which specializes in low budget, high caliber documentaries and films which are often shot under difficult conditions.

‘Men at Work: Cinematic Lessons from Abbas Kiarostami’ is his first book.