The year just past brought no drastic change in the slow pace of translation from Persian literature, resulting in no more than a handful of slender volumes. The titles chosen, however, compensate for quantity. These recent translations cover an exciting range of genres and subjects that together form a polyphonic list of Persian literary practices available for enthusiastic readers.

In the history of modern Iranian literature, Bahram Bayzai (b. 1938) is a towering figure who has single-handedly untertaken a wide range of activities from playwriting to directing, screenwriting, and research, to name only a few. His Kalat Claimed (فتح‌نامه‌ی کلات) was originally composed in 1982 as a play in Bayzai’s uniquely archaistic style of dramatization. An account of two generals’ dispute over the claim of a region named Kalat in time of Mongol conquest of Khwarezmia, the play enjoys Bayzai’s emblematic idealization of feminine spirit. It was first published by Damavand Books in 1984, and then reprinted by Roshangaran. In November 2016, Manouchehr Anvar’s endeavor to translate the text finally fructified after two decades, and the English version was released in 227 pages by Roshangaran, the exclusive publisher of Bayzai’s oeuvres. Although the play was never staged in Iran, fingers are now crossed for an English premiere of the piece in the U.S. where he has been living for years.

An alluring release by Phoneme Media this year is a novel by the Iranian writer and filmmaker Yaghoub Yadali. Rituals of Restlessness won two national Iranian awards in 2004. The novel, however, put the writer in trouble in 2007 when Yadali was sentenced to one year in prison for depicting certain scenes challenging social and sexual taboos. However, with the change of the political season during the cultural ministry of Ali Jannati, the book reappeared on bookshelves. The opening of the novel promises a fun read: Engineer Kamran Khosravi is planning death in a car accident and his wife no longer stands him. Kamran’s twisted life awaits an unprecedented dark ending.

III. The Rapture: Or the Book of Sleep (Dissident Fiction)

The history of English literature is replete with lettered courtiers who have gained historic fame with the might of their pens. Persian courtiers of the “Naseri Era” of Qajar Dynasty were also accomplished in pen-craft, although their works have been neglected by the literary canon for a long time. Courtiers like Mohammad Tahir Mirza Qajar and Naser-ol-Mulk Qaragozlu were among the first translators of early modern masterpieces of western civilization: Tahir Mirza translated Dumas’s Three Musketeers and Naser-ul-Mulk made a Persian version of The Merchant of Venice. Another important courtier and writer during much of Naser-al-Din Shah’s reign was I’timad-al-Saltanah, author of an outstanding dissident fiction titled The Rapture. The book opens with the narrator’s fall into sleep in a mosque at the ancient town of Saveh only to find himself among heavenly beings who are awaiting trial: the imaginary trial of the prime ministers of Qajar dynasty. The Rapture is now available in English, thanks to James D. Clark’s translation, and is published in 278 pages by Mazda Publishers. If you are interested in political parables from the Middle East, the book is meant for you.

IV. After Tomorrow the Days Disappear: Ghazals and Other Poems

“Lacking the ruby of your lips, my eyes filled with secret pearls./ Pupil of the eye, cast your glance again/”

Some classic Persian poetry was on the shelf last year: the ‘classic’ poetry of Hasan Sijzi, also known as Amir Hasan Sijzi Dehlavi, who is considered the originator of the Indo-Persian ghazal. Perhaps a Persian equivalent of the Metaphysical sonnet with its overemphasis on far-fetched conceits, the form of ghazal has influenced a large body of poets from Hafez and Jalaleddin Rumi to contemporary Anglophone poets like John Hollander, Maxine Kumin, Agha Shahid Ali, and W.S. Merwin. The qhazals are translated by Rebecca Gould and published in 144 pages by Northwestern University Press.

Literature about children is a blooming genre in contemporary Iran, and Parinoush Saniei, a sociologist and psychologist, is one of the highly recommended writers in this field. Her first novel, The Book of Fate, won the Boccaccio Prize in Italy, Euskadi de Plata Prize in the Basque Country, and was selected as one of World Literature Today’s 75 Notable Translations of 2013.

In August 2016, House of Anansi Press released the English translation of her second novel, I Hid My Voice, which soon drew attentions and received positive reviews in media like Guardian and Minneapolis Star Tribune. The novel is about four-year-old Shahaab who has not started talking. Although it is regarded as normal by physicians, the ridicule the little son received is beyond his patience. To cope with the humiliating conditions, he develops an idea that all normal kids are their fathers’ sons whereas the “dumb” are their mothers’. The book has been lauded for its digging into social texture of Iran as well as its insightful portrait of the world of innocence. 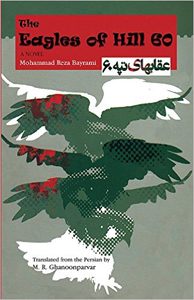 Since its establishment in 1980, Mazda Publishers has published a number of works from Persian literature under the supervision of M. R. Ghanoonparvar. Eagles of Hill 60 is the second novel by contemporary writer Mohammad-Reza Bayrami that Mazda releases after The Tales of Sabalan. Eagles of Hill 60 is both a bildungsroman and a war novel, taking as its setting the frontline in the longest and one of the most devastating wars of the twentieth century during the Iran-Iraq War. The protagonist of the story, Ahmad, is concerned with his natural environment, particularly the eagles dwelling in the nearby hill, in contrast to the reality of war that is going on around them.

The next to last but not the least positions on this year’s list are taken by a young publisher based in London, which concentrates solely on ‘Persian literature in translation.’ There are particularly three titles in Candle and Fog’s 2016 catalog that seem to respond to plurality of taste and choice. The struggle, however, as with many other small presses, is to reach global readers as quickly and easily as possible; in spite of their charm, the books are not yet in stock anywhere on Amazon or similar global book distributors. 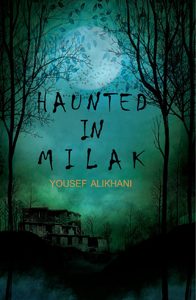 Originally published in Persian as “Ghadam-be-kheir Was My Grandmother” (قدم به خیر مادربزرگ من بود), the short story collection goes against the grain to tell the superstitious tales of the villagers of Milak located in Alamut region of Qazvin Province. At a time when bookshelves are jam-packed with monotonously similar urban narratives, writer and ethnic researcher Yousef Alikhani’s endeavor to document Alamouti dialect and traditions has resulted in a number of novels and short story collections whose phantasmagoric world of Persian fairies and genies is not going to stop surprising the reader. 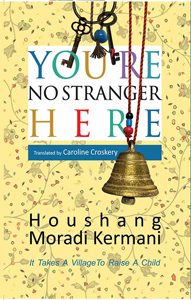 Houshang Moradi Kermani’s body of work is a nostalgic resonance in the collective memory of Iranian readers for his popular Tales of Majid series. Moradi Kermani regards the book You’re No Stranger Here (شما که غریبه نیستید) as his autobiography: the lonely life of a single child in Kerman whose father is fired for lunacy and the family has to migrate to a small village behind Kerman Mountains. Its frank and lucid portrait of life-as-is with a touch of humor and tantalizing prose are probably the main reasons behind its wide reception. Caroline Croskery has recently translated this autobiographic novel by Moradi Kermani, and published it with Candle & Fog.

IX. Year of the Tree (Novel) 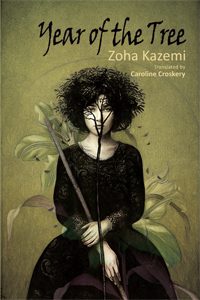 A novel by young writer Zoha Kazemi, Year of the Tree is an account of the decline of a traditional Iranian family as the female protagonist struggles to migrate to Canada. To do so, she has to abandon her brother with Down Syndrome in a sanitarium. Another translation by Caroline Croskery, the novel offers a fresh perspective of modern life in Iran.

Persian poetry is sugar, so says Hafez. Why not put some Persian sugar on the 2016 list? Of course not the classic rock candy that Hafez took pride in sending it off to Bengal, rather some industrial (modernist) sugar cubes dispatched to Latin America: Standing on Earth is a 120-page collection of poems by Mohsen Emadi, an Iranian poet, translator and editor based in Mexico City. The poems in this collection are themed on an autobiographic sketch of exile, memory and displacement presented through the poet’s defamiliarized perspective. The collection was translated by the American poet Lyn Coffin and published by Phoneme Media in November 2016.